Combining Naim’s 45 years of hi-fi mastery with the very latest music-streaming technology and premium design quality, this is the ultimate single-box system you and your music deserve. From up to 32bit high-resolution streaming to multi-room music to HDMI TV sound, you’ve never heard it so good from an all-in-one wireless system!

Mu-so 2nd Generation is packed full of game-changing performance, feature and functionality upgrades. Enjoy your music, any way you want.
—

Almost Everything Has Changed
— 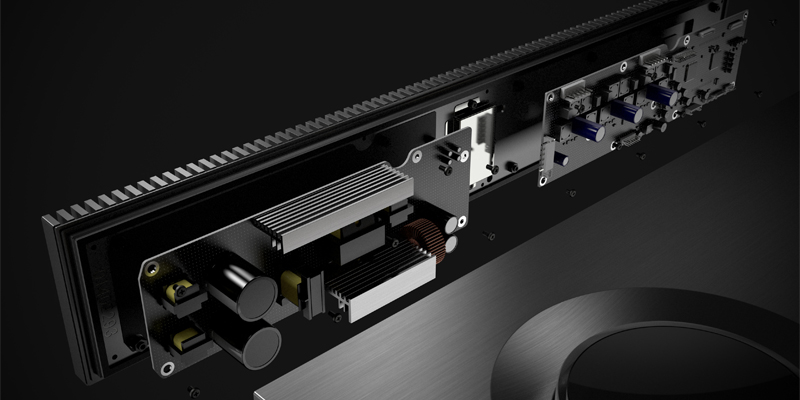 —
At the heart of Mu-so 2nd Generation is Naim’s music-streaming platform, developed by 25 engineers over 3 years to offer the very best performance whether playing your own digital music collection, a world of Internet radio, or music streaming services such as TIDAL and Spotify. This acclaimed innovation is uniquely found in Naim music-streaming products, such as its Uniti range and dedicated network players, including the £20,000 flagship ND 555.

The heart of the System

Naim has also created a brand new limiter algorithm that keeps each of Mu-so 2nd Generation’s speaker drivers’ movement under control when at high volume levels. The new limiter, by design, is only active at extreme volume levels, where it helps to retain your music’s clarity and increase long term reliability.

—
At the heart of Mu-so 2nd Generation is Naim’s music-streaming platform, developed by 25 engineers over 3 years to offer the very best performance whether playing your own digital music collection, a world of Internet radio, or music streaming services such as TIDAL and Spotify. This acclaimed innovation is uniquely found in Naim music-streaming products, such as its Uniti range and dedicated network players, including the £20,000 flagship ND 555.

It may look similar outside, but inside Mu-so 2nd Generation, the majority of components have been upgraded to improve performance.

The cabinet design has been re-engineered to create 13% more internal volume, enabling bigger, better bass. Both the cabinet bracing and baffle moulding have been redesigned for improved rigidity, which suppresses and controls vibrations.

The distinctive heat-sink fins are now more compact, while still being ultra-effective, and continuing to feature Naim patented technology that discreetly incorporates the wi-fi antenna.

Classic wireless speaker gets a boost in performance and price

By What Hi-Fi? Posted 12 hours ago Review 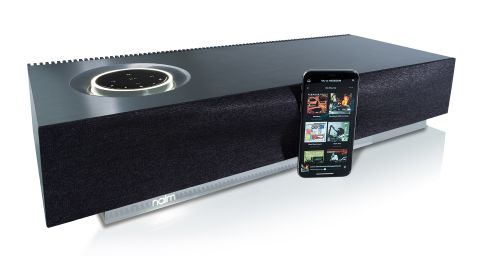 A superb-sounding, fully-featured wireless speaker that justifies its considerable expense

Die Hard 2, Once Upon A Time in Mexico and Star Wars: The Force Awakens are all examples of how a sequel can work by simply repackaging a successful recipe. The all-new Naim Mu-so 2nd Generation (or Mu-so 2) is a similar case of a tale twice-told.
Put it side-by-side with the original Mu-so and the two near-identical aluminium boxes may lead you to initially dismiss this as a soft update. But to judge the Mu-so 2 by its cover would be to undermine the progression it brings to the Mu-so line. According to Naim, 95 per cent of the Mu-so 2 is new: drive units, digital signal processing, connectivity and cabinet.

Five years ago, the Mu-so arrived to a chorus of praise. Such was the unique one-box offering of wireless network multi-room streaming, physical connectivity, amplification and speakers, we weren’t sure what to call it. An all-in-one hi-fi system? A streaming system? A wireless speaker?

Since then, there have been many similar products, yet the Mu-so has retained its relevance. As competition grows and new streaming platforms (such as AirPlay 2) arrive, an update does seem timely – even if Naim has boldly priced the Muso 2 at £400 more than the original.

Naim has naturally carried its new comprehensive streaming platform – the beating heart of the brand’s latest streamers and systems, such as the ND5 XS 2and Uniti Atom – into the Mu-so 2. This gives it UPnP streaming of hi-res music up to PCM 32-bit/384kHz, direct streaming from Spotify Connect and Tidal, Apple AirPlay 2, internet radio and Google Chromecast, which brings Deezer, Qobuz and Google Play Music to the table. Naim claims to have improved the wi-fi stability, although a wired ethernet connection is still a good option.

As with the original Mu-so, offline streaming is catered for with Bluetooth, while USB, optical and 3.5mm inputs offer the ability to connect another source, such as a CD transport, CD player or television. On the latter, Naim has also decided to add a HDMI ARC socket so you can hook the Mu-so 2 up to your telly or AV receiver to pass-through high-quality Blu-ray formats, such as Dolby TrueHD, and also use a single remote to control all connected components.

Control comes from the latest version of the neatly-designed Naim app (iOS and Android). The home screen offers a simple input selection and preset access, the display of our server’s library features the album art and is easy to browse through. Tidal is nicely integrated too, and the whole experience is responsive on the One Plus 7 Pro smartphone (Android) and Apple iPad (iOS).

The app is also your go-to for multi-room pairing and control. The backwards-compatible Mu-so 2 can be paired with other Mu-so 2, Mu-so and Mu-so Qbspeakers, or other compatible Naim products, using the latest streaming platform in three ways: via AirPlay 2, Google Chromecast or Naim’s own software.

The first two are accessible on Apple device software and either through a Chromecast-enabled app or Google Home app. Streaming from your NAS drive in multi-room can be achieved via the Naim app’s ‘now playing’ interface. Connect, disconnect and change volumes independently by pressing the bottom-right four-square icon. You should be able to pair up to eight speakers, if you have the space.

A selection of settings allows you to do everything from naming and updating your Mu-so to setting a sleep timer or alarm clock. You can tailor the sound based on where the Mu-so 2 is positioned – choose from ‘Near Wall’, ‘Near Corner’ or, when out in the open ‘No Compensation’. Users of music player curation software Roon can control the Roon-Ready Mu-so 2nd Generation via Roon’s own app.

The flat handheld remote isn’t as nice as the rounded wand supplied with the original Mu-so, but it offers a more basic means of control if you want a break from your smartphone or tablet screen.

On-unit controls rarely feature highly in our reviews, but the Mu-so 2’s off-centre dial is worth more than a passing mention. An improved touch control panel, ringed by a silky-smooth illuminated dial, allows you to change volume, switch sources and select preset music to play.

Up to five presets, such as albums, playlists or radio stations, can be set via the Naim app. Thanks to a proximity sensor, you can wake the display with your hand and illuminate the icons ready for use.

While the Mu-so 2’s stylish aesthetic heritage is obvious, there are tell-tale signs of its individuality next to the original. The aluminium chassis sports a new burnished grey finish and the front wave-like grille, available in black, terracotta, olive and peacock (blue), is now made of a new nylon and polyester knit fabric that Naim says improves sound sensitivity by around 1db in the midrange.

To improve performance, Naim has fitted new drivers – optimised in collaboration with Focal and collectively driven by 450W of amplification – and advanced the capability of its digital sound processing.

Each driver has been reconsidered: the bass unit has been given a longer voice coil and larger magnet to reduce distortion, while the midrange has a better-damped surround to improve its phase with the cone.

The new processing is capable of 13 times as many instructions as the original Mu-so, and all digitised analogue inputs and all digital inputs are upsampled or downsampled as necessary to a 24-bit/88kHz output. Naim has paid attention to digital timing too, extending the duties of the system’s Master Clock to the streaming card too, as is the case in Naim’s high-end ND555 streamer.

Those improvements combined have secured a calibre of sound that’s more next level than incremental. While there is the familiar richness, both in terms of tonality and quality, the Mu-so 2 walks all over its predecessor when it comes to detail, dynamics and rhythmic dexterity.

The Mu-so 2 effortlessly opens up The National’s Hey Rosey, and everything in that more spacious soundfield – the pitter-patter of piano, the slicing strings, the Gail Ann Dorsey accompaniment – is clearer and more nuanced. The chorus’s kaleidoscopic rhythm pattern sounds much more systematic, too.

The gentle dynamic build to Maribou State’s Turnmills is more obvious, there’s more euphoria to the playful melody, and the entrancing vocal traverses the electronica with greater presence.

To augment bass, Naim has re-engineered the physical structure of the system to increase the cabinet volume by 13 per cent. As the track’s drum loop kicks in, it’s clear that the bass has more control and conviction – the drum machine pattern in Twilight Sad’s It Never Was The Same sounds more sinister and stately than it does through the Mu-so.

Musicality is still at the heart of the Mu-so 2’s performance as a soundbar. There’s weight, insight and liveliness, and as we tune into the FIFA Women’s World Cup, the commentary is clear and coherent.

You don’t get the scale of sound you do from the best premium soundbars (such as the Dali Kubik One or Sony HT-ST5000), or the bass volume of those with external subwoofers. But there’s no question that the Naim does justice to soundtracks and dialogue alike, offering significant improvements over TV speakers.

We’re surprised just how much sonic progression the Naim Mu-so 2 brings, however these advancements are necessary to justify the hefty price increase over the original.

At the time of writing, the first generation Mu-so can be bought forseveral hundreds of pounds less, but for the extra cost here, you get a better performance, extra sonic insight, better usability and the inclusion of an HDMI socket.

And, just as the best film sequels manage to add something to their franchise, the Mu-so 2nd Generation proves a worthy successor and a fine addition to the Mu-so range.