Built into a completely re-designed custom case, the Aura is dedicated to moving coil cartridges and stays clear of any compromises. Rega has avoided including any superfluous functions that might obstruct the signal path and degrade the sound quality. The Aura phono pre-amp incorporates remarkable and innovative design ideas. If you are a vinyl connoisseur, then the Aura MC is an absolute must hear! 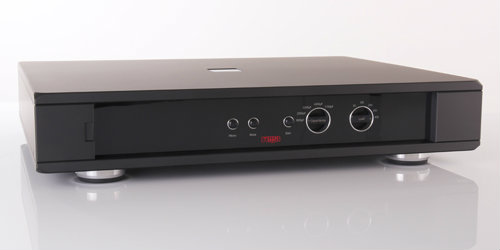 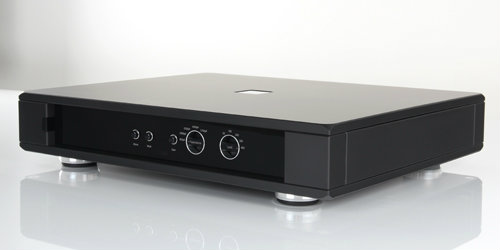 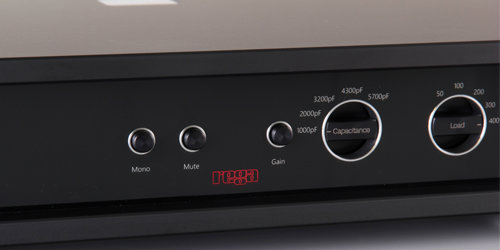 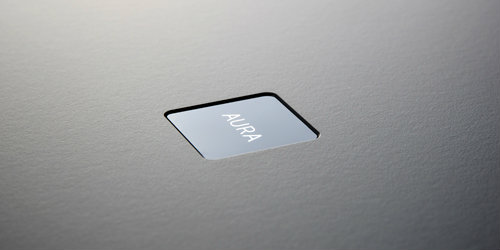 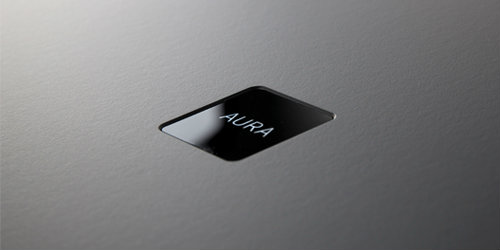 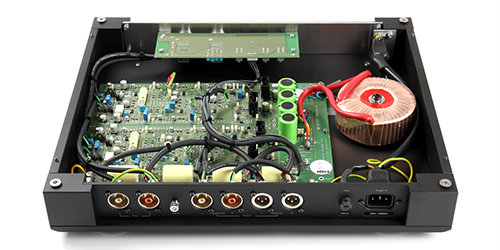 The Rega Aura is a three stage, all symmetrical pre-amplifier. The first stage is a symmetrical, complementary class A amplifier, using parallel connected Linear Systems ultra-low noise FET (Field Effect Transistor) transistors configured as a symmetrical compound pair input stage. The use of FET transistors ensures there is no bias current flowing in the cartridge coil so as not to upset the delicate magnetic geometry of the cartridge. The input circuit configuration also alleviates the use of any coupling components between the cartridge output and the input stage FET transistors, which would degrade the sound. The complementary ultra-low noise FET transistors are carefully graded and matched for optimum performance. This stage drives the passive high frequency part of the RIAA equalisation stage.

The second stage is a symmetrical, class A, differential amplifier with a common base driver stage; this is also used as the active amplifier in the low frequency part of the RIAA equalisation stage. The third stage inverts the signal to provide the balanced output along with the output of the second stage; the third stage uses the same circuit topology as used in the second stage. The power supply is a symmetrical, discrete tracking power supply using fast diodes and a low noise voltage reference. Each stage has its own localised power supply and LED referenced current generators. To maximise headroom, the Aura has a power supply voltage, which is 60% higher than normally found in such a pre-amplifier. Very high quality, polypropylene capacitors have been used in the signal path. 1% tolerance polypropylene capacitors are used in the RIAA EQ stages and audio grade capacitors are used in the rest of the circuit. Gain, Mute and Mono switching is implemented using high quality relays.

Please note: mute or turn the volume control to minimum when changing the gain setting. The gain setting switch selects the voltage gain of the phono amplifier. Gain I selects 69.5 dB (switch out) and Gain II selects 63.5 dB (switch in); this will provide an input sensitivity of 67 μV and 131 μV respectively for an output level of 200 mV unbalanced and 400 mV balanced. The balanced output is effectively 6 dB higher than the unbalanced output. It is advisable to start with the lower gain setting II and if necessary, increase the gain level to I if more level is required for lower output cartridges. Because the balanced output is effectively 6 dB higher, it could be advisable to select gain II setting when using the balanced output; this will also depend greatly on the sensitivity of the connected amplifier.

There are five different input capacitance settings of 1000 pF, 2000 pF, 3200 pF, 4300 pF & 5700 pF. Select the required capacitance to match to that specified by the manufacturer in the cartridge specifications. It is permissible to try different loading conditions as sometimes changing the capacitance gives a different sonic performance more suited to your personal taste; this also applies if there is no loading capacitance specified by the manufacturer. To match some ‘legacy’ pre-amplifiers, select 5700 pF. The 1000 pF setting is optimised for the Rega range of MC cartridges.

There are five different input load settings of 50 Ω, 100 Ω, 150 Ω, 300 Ω & 400 Ω. Select the required load to match to that specified by the manufacturer in the cartridge specifications. It is permissible to try different loading conditions as sometimes changing the load gives a different sonic performance more suited to your personal taste. To match some ‘legacy’ pre-amplifiers, select 400 Ω. The 100 Ω setting is optimised for the Rega range of MC cartridges.

This function allows you to play mono recordings via a stereo cartridge. 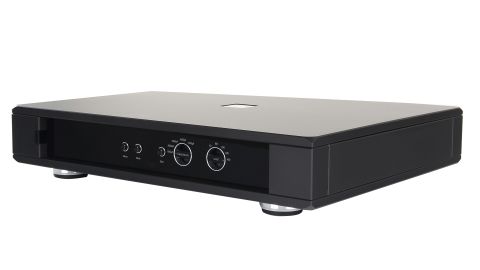 If you’re looking for an insightful and exciting high-end phono stage, this Rega is a brilliant place to start

The idea of a phono stage from Rega Research costing nearly £4000 is still surprising. It’s not that the company can’t make products at this level – it has done so for many years – but with the heart of the brand so clearly at more affordable levels, it makes the Aura stand out.

Rega is ever mindful of value, and so has been careful to avoid the current fashion for outlandish prices, even for its most premium products. The limited edition hand-built Naiad record player (£30,000) aside, all are pitched at the first step of high-end hi-fi, with the Isis CD player and Osiris integrated coming in at around £6,500. Surprisingly, the current series production range-topping turntable, the RP10, tops out at a relatively modest £3149 without cartridge.

Until now the company’s most ambitious phono stage was the Aria. This £839 MM/MC unit remains one of the most capable performers below the grand mark, delivering a sense of musical cohesion and energy that’s hard to better at its level. But the huge price jump to the Aura has us wondering whether Rega can actually produce something good enough to justify that sizeable chasm.

Taking the Aura out of its packaging is enough to convince us that it’s a rather different proposition to the cheaper sibling. At 13kg, it weighs as much as a typical premium integrated amplifier and its casework exudes a rigidity that inspires confidence.

The Aura’s build quality is impeccable, with a superb fit and finish and an impressively precise feel to its controls. This phono stage is designed for use with moving coils only, which is fine considering the vast majority of cartridges used in this part of the market are of this type.

If you’re the kind of person who routinely swaps between high-end moving coil and moving magnet cartridges this Rega isn’t for you. Instead, we would point you towards the likes of Luxman’s terrific £5,000 EQ-500.

Round the back, there are standard single-ended sockets to connect your record player and a choice of both single-ended or balanced XLR outputs. That’s all most will need, though at this level it isn’t unusual to have more than one turntable or a deck with more than one arm, so multiple inputs would have been nice.

Phono stages, particularly those that focus on just one type of cartridge, don’t tend to have much in the way of features, and the Rega doesn’t buck the trend. Aside from power, there’s a gain switch that changes the level from 63.5dB to 69.5dB – enough to cope with most moving coil cartridges on the market – mute and a mono option. Electrical loading is adjustable, with resistances from 50-400ohms and capacitance options between 100-5700pF. These are sensibly chosen values that will suit most partners.

Some top end rivals offer a choice of equalisation curves. It’s a niche thing, but so is a phono stage of this price. While the industry standard RIAA curve incorporated here is optimal for recordings from around the mid-1950s onwards, those with older discs won’t get the best out of them using the Aura. Whether this matters to you is down to the age of your collection, though the Rega will still produce a fine sound, even if it’s not optimal.

Look inside the Aura and you’ll see a three-stage symmetrical FET (Field Effect Transistor)-based main circuit board packed with good quality components and driven by a generously specified power supply. The design is based around a clean, uncluttered signal path to maximise performance and keep the musical integrity of the cartridge’s signal intact.

Any phono stage at this level demands a high-quality source and partnering equipment. We use our reference Technics SL-1000R record player (with a Kiseki Purple heart moving coil cartridge) to good effect. The rest of the system is made up of our usual Gamut D3i/D200i pre/power and ATC SCM50 speakers.

It doesn’t take the Aura long to impress. Within minutes of powering up we’re noticing clear improvements in resolution and precision over our normal reference, the Cyrus Phono Signature/PSX-R2 (£2,290). Of course, given the difference in price between the two products we’d expect better sound, but even so, the Cyrus combo has stood up to pricier alternatives with ease.

The Aura’s character is clean, crisp and articulate. It takes a complex recording such as Radiohead’s 15 Step and presents it in a wholly organic way. We’re impressed with its ability to track the leading and trailing edges of notes with precision, but most of all by the way it resolves so much information and assembles it in such a musical and organised manner.

The Rega is an exciting listen, squeezing every last drop of energy from the signal. But, it doesn’t ignore the subtleties either. There’s nuance to Thom Yorke’s vocal and we revel in its passion.

Moving to Kind Of Blue by Miles Davis shows off the Aura’s even, open tonal balance. It’s got more sparkle at the top-end than most alternatives we’ve heard, but this isn’t an issue unless the rest of your partnering system is bright or aggressive. That sparkle gives the Aura’s presentation plenty of immediacy, which just draws us into the music.

The Aura’s clarity is class leading, as is the way it renders the dynamic envelope of instruments. It’s a bold, upfront presentation that makes up in entertainment what it loses in image depth, refinement or outright spaciousness.

Alternatives such as the Luxman are more laid-back in their approach, offering greater sonic smoothness and a more expansive sound stage, regardless of the recording. The EQ-500 is also far more flexible, offering moving magnet compatibility and a range of other useful functionality the Aura can’t match. Also, the Rega has a more demanding nature, and will highlight shortcomings in the record player and source material more readily.

The Aura has the upper hand when it comes to rhythmic drive and sounds more dynamically expressive. They’re both fine products, and the choice depends on taste and partnering system as much anything else.

We really rate the Aura. Its combination of agility, dynamic expression and rhythmic coherence is deeply impressive. If you have a system that can make the most of a phono stage of this level, dive right in. You won’t be disappointed.